Tokatā lighthouse at Nugget Point, Southland reveals itself perched up high on steep cliffs – a simple, unassuming structure – but obviously tasked with the important job of protecting ships in this dangerous stretch of water. Built in 1869, standing 76m above sea level, it is still in operation today – albeit remotely.

Finding ourselves a little way out of Invercargill already, after watching a road cycling race, we took a chance late one afternoon and headed out to The Catlins – Nugget Point and Lighthouse to be exact. On a previous trip, we had ventured as far as Waipapa Point to see the lighthouse, the rugged coastline and sand dunes – even lucky enough to sea lions sunbathing on the beach.

We had hoped to venture further and see more of The Catlins but ran out of time on that trip, so hence our last-minute decision and dash to Nugget Point that afternoon. Not knowing if we would have another trip or opportunity, we headed off with blackening skies and heavy rain threatening on the horizon.

We passed through a pretty little village called Kaka Point, about 11km out from Nugget Point, famous for its surfing, beaches, and of course lighthouse.

To our surprise, the sun shone as we reached the car park at Nugget Point, in fact, the slither of blue was now covering the whole sky. With the strong wind whipping up around us though, we were more bothered about thick jackets and hats but the reality in fact was T-shirts and sunblock!

Hidden from view initially, Tokatā Lighthouse reveals itself perched up high – a simple, unassuming structure – but obviously tasked with the important job of protecting ships in this dangerous stretch of water. Built in 1869, standing 76m above sea level, it is still in operation today – albeit remotely – like many of us these days! 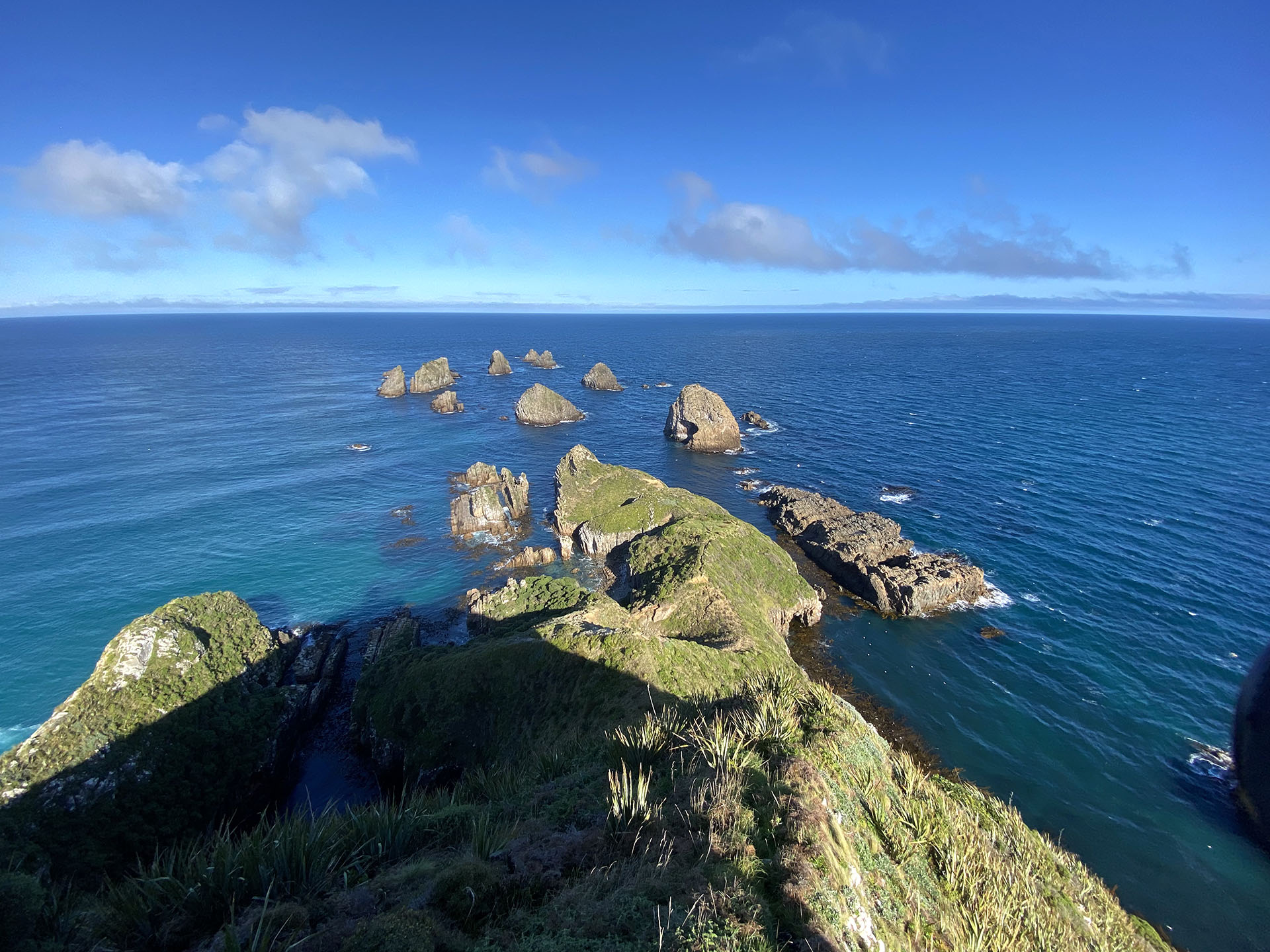 How lucky were we, the 5 o clock evening light was the perfect time to see ‘the nuggets’ as they are called, the various bits of eroded rock that stick up out of the water – so named by Captain Cook as they looked like pieces of gold. Even though we had the golden light, we couldn’t quite see what Captain Cook saw on that day but with views of the dramatic, rugged coastline and the surrounding blue, blue waters – you can’t help but not be impressed. This is nature at its rawness – if that is a word! The cliffs’ sheer rock face makes you hold onto the rail or take a step back particularly if you are peering over the edge – it’s quite a drop. We didn’t spy any fur seals or penguins that day as it wasn’t the right time of year but there was plenty of birdlife riding the blustery conditions. As the only ones there, standing on the viewing platform that evening, we felt like the only people alive standing at the very tip end of the world.

For us, it made us realise there is definitely gold out there to discover.

See New Zealand, explore, and discover our beautiful country. At See New Zealand, we provide all the stories of places, people, and information on this website from first-hand experience.