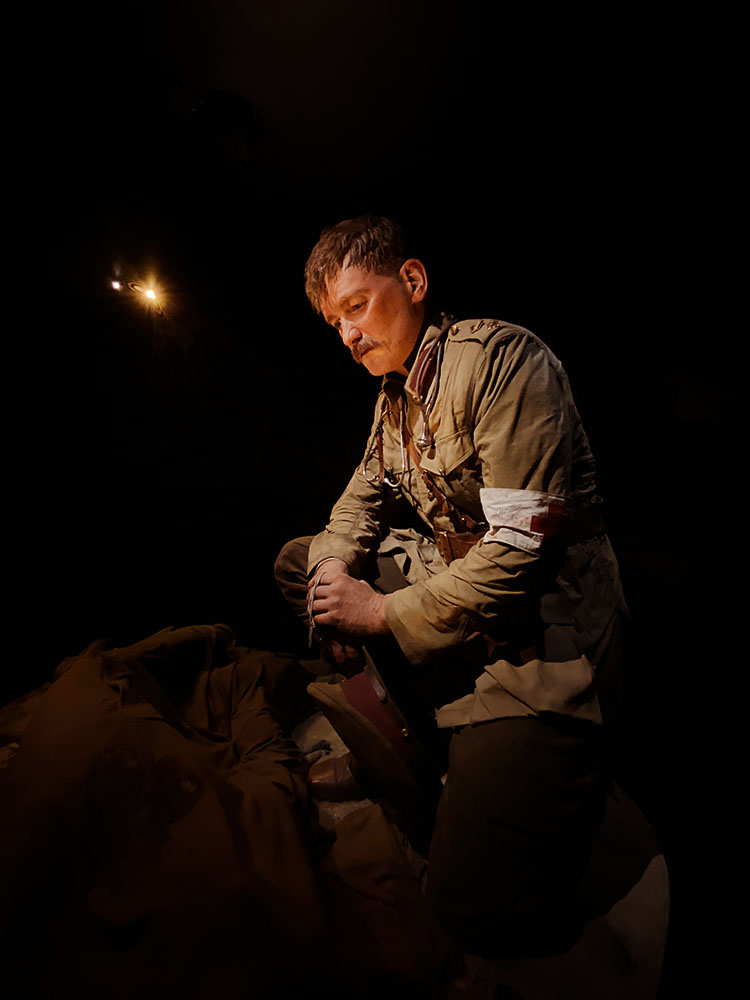 Gallipoli – The scale of our war, Te Papa, Wellington.

On a recent trip to Wellington, we visited Te Papa to view the Gallipoli: The Scale of Our War exhibition. When we entered the collection, we were unprepared for the scale. We had heard they were significant in size – but they were monumental, each figure captured in a moment of time – is 2.4 times the human size!

It’s hard to describe the impact these characters have on you. It’s not the positions of the figures (a few of them are casualties) or the scale – it’s the detail. They look human, I mean really human, so lifelike that if they moved, it wouldn’t have surprised you.

Each sculpture has incredible detail, especially on their hair, skin and uniforms. On the figure of Staff Nurse Lotte Le Gallais – she had tears so real you could feel her sadness.

The only part missing was their voices.

Te Papa worked with Weta Workshop to create these life-like figures. This stunning exhibition follows the stories of the Gallipoli campaign in World War I as seen and spoken through eight New Zealanders who were at Gallipoli.

Gallipoli: The Scale of Our War combines the world of museums with the world-class creative artistry of the Weta Workshop to immerse you in the eight-month Gallipoli campaign.

2,779 Kiwis lost their lives on Gallipoli, and many others were scarred forever. Gallipoli: The Scale of Our War takes you to the core of this defining event.

We have been lucky to visit Gallipoli back in 1999. We are surprised that there were no more losses during the assault on Anzac Cove. It’s through their courage and the ANZAC spirit that they endured during this campaign.

See New Zealand, explore, and discover our beautiful country. At See New Zealand, we provide all the stories of places, people, and information on this website from first-hand experience.

See New Zealand in your mailbox